This specification describes changes to Launch Control during Ubuntu-N cycle that aim to improve display of test results.

Current user interface is minimalistic. To make the tool useful and productive for the intended audience we need to develop specialized views, reports or charts/graphs that will extract and present key information relevant to the developers using the system. By building a generic reporting framework we can simplify and streamline the development of actual reports by providing common elements in one package. Doing so can enable third party developers to work on their reports without having to do development in the core/trunk.

All changes here will apply to the Launch Control project. Some changes may spill to several of the sub-projects that were spun off to separate projects/branches for better isolation and maintainability.

The website would get a new section "Reports" as visible on the mock-up below. This section would serve as a hub for both browsing available reports as well as creating new ones. Each report would be a dynamic view that generates some sort of chart/table/document based on the (stored) configuration and available data. Adding new data to the system might change existing reports. Storing a "snapshot" of a report would be an optional feature. Initially it would be best to simply allow the user to save the image/document locally. In the future we might consider storing snapshots inside the system (as test data cannot be altered, just appended and we store import timestamp it would be simple to add global time constraints to generate the report as it appeared at a particular time).

The sidebar would list available stored reports grouped by sharing type. The following values would be supported:

Clicking any element in the sidebar would take the user directly to that report (the URL would be constant so it can be easily shared with other users). User should also be albe to remove reports directly from that page. Each report can be removed by the report owner or by team member (for team reports).The content area would have a simple wizard (perhaps the first out of several pages/steps) to create new report. A detailed mockup for the wizard is shown below.

The first page would allow the user to select just two pieces of data:

The continue button would take the user to the dedicated wizard which is discussed below.

In general each subsequent step/page would conform to this template:

Each wizard page would have three major parts:

Implementation should start as a branch to launch-control. Additional features that need to alter the core should be carefully managed, rest of the application should be developed in a new application (separate directory still tracked in the same branch for simplicity). Before inclusion the app should be separated to a standalone branch (hopefully with bzr-split) and the changes to core should land in trunk.

Each new report class would be a dedicated application. This could allow administrators to deploy the apps their users care about and most importantly allow unrelated developers to contribute to the core system by writing vertical solutions based on a common platform APIs. Each application would need to conform to some standard entry point/registration mechanics so that it gets picked up by the dashboard application. 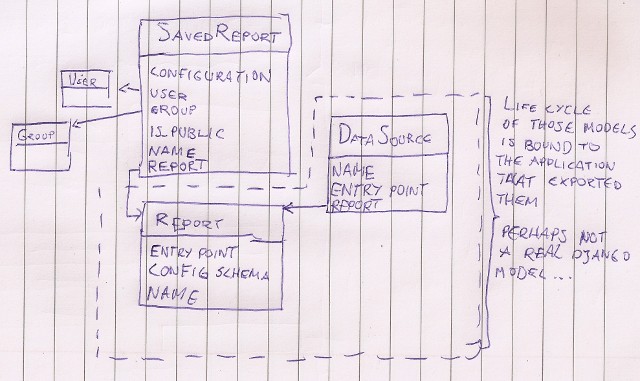 The following models are needed:

Each stored report (configuration parameters for generating a report against live data) would be a JSON document that is stored in the system. This would prevent us from having to alter the model to add new reports that don't need new database schema or some elaborate intermediate data format that is expensive to compute. Each report class would contain a schema that the configuration document must conform to.

The following views are needed:

The following XML-RPC extensions are needed:

Each report application must register data sources. Data sources would be generalized methods that take a configuration object and return a collection of results. All of that data would then be exported by the main reporting application as either HTML table, Chart (based on the app-specific view and AJAX access to the data source) and XML-RPC (for scripting). Details need to be specified later.

Unless there is a reason to change this each "chart" should be built with server-side data (AJAX request to one of the exported data sources) and client side renderer (Open Flash Chart 2: http://teethgrinder.co.uk/open-flash-chart/)