We wish to provide better high-level status information about the progress of the Linaro project towards its goals for the cycle.

While much of the information is available about the status of individual specs, tying this all together to get summary progress, and matching this against the goals set out be the TSC is an involved process.

The following information is desired:

The information needs to be linked back to TechnicalRequirements.

The landing page is a summary page for the whole of Linaro.

On this page there are visualisations of the current state and trend of progress.

This satisfies some of the first user story, as a TSC member can see the progress of TRs on this page, and can see which blueprints are contributing to that TR, the progress on the blueprint, and who is assigned.

The team-specific pages are similar to the landing page, but with the data limited to show things relevant to that team.

This satisfies the third user story, as the team lead can see what is assigned to each team member.

For each person there will then be a person specific page, this will be similar again, but will have:

Mock-up by JamieBennett showing some of these concepts. 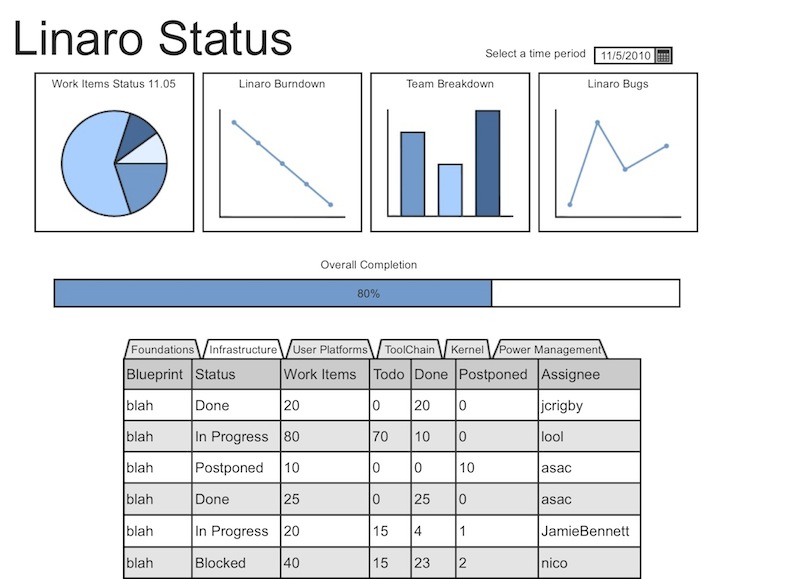 Linaro blueprints are tracked in many projects, each of which can have its own milestones.

Each workitem can be targetted for a specific milestone, and we know that it should be completed prior to that milestone.

This means that for any milestone we know the list of workitems that are expected to be completed for that milestone, and so can record the counts of those workitems in each status at each point leading up to that milestone.

From this we can draw a graph of those counts over time, with the end of the graph being the delivery date of the milestone.

For this to be a full burndown chart we need to know the "start date" of each milestone, as well as its end date. This is the date at which engineers will start to concentrate on that milestone. If we choose an earlier date then the trend line will be too shallow to be of use.

Currently the code picks the delivery date of the previous milestone as the start date of the next (where next is defined by the chronological order).

However, when there are multiple projects are involved this can't work the same way, as some milestones don't make sense for some projects.

We can solve this by having milestones start on the day that the previous milestone in the same project completes.

This will give similar behaviour to before, and allows project leaders to control the start dates of particular milestones by adding another milestone at the start date that they want.

There are two cases that are not handled that well here:

We will use the second option.

There may be groups that do not like this approach as they consider the equivalent milestones to be separate, and don't want to track them together, despite them having to deliver all the work on the same day. If that is the case then we will have to look at a modification to this solution that accommodates that desire, or convince those teams to use the proposed approach.

Only generating pages that teams expect

There are two cases where we will generate too many pages:

For the first we would need to decide whether a team had any interest in a milestone whatsoever (The fact that a linaro team has no workitems targeted for a Linaro milestone is still interesting).

The second is trickier as we have to decide for each team which milestone name is more appropriate for them. For Ubuntu teams it is the Ubuntu name, and for Linaro teams it is the Linaro one. It would be nice to do this without explicit configuration.

We currently have no solutions to these two issues, but they are not pressing problems so we will live with the issues for now.

Blueprints can be linked to bugs, and we want to allow people to use that to indicate workitems.

However, it is bugs that are linked to blueprints, and there can be many bug tasks on each bug, so it's not clear which of them should be workitems for Linaro to do.

To decide which bug tasks we should create workitems for:

In order to be able to implement the above we need the following information:

The other pages work similarly.

Milestones should become associated with a particular project, but remain accessible as workitem targets from other projects.

When searching for the start date of a milestone, the code will look for the previous milestone in the same project.

One possibility is to use the Business Intelligence and Reporting Tools (BIRT) project to generate these reports.

This was discounted, as it would take a while to get the reporting service running, and we would have to create the reports and probably make code changes to allow us to gather the needed data. It was estimated that this would take longer than modifying the existing infrastructure. We may want to revisit BIRT at a later date, as it would provide more flexibility in report creation.

BIRT provides a report designer and a report viewer. The first is used as part of Eclipse, and the second is run inside Tomcat on a server.

BIRT works by querying databases and displaying custom reports based on the output.

There are three areas of work that would be needed:

We need to create a database with information on the current status of blueprints, workitems etc.

This database needs to contain:

Once we have the database we need to create the reports that will present the data.

TODO: design of the reports.

Once we have the reports we need a BIRT viewer instance to make them available to people.

TODO: investigate whether this is as simple as deploying an instance, e.g. how do we ACL?