The current cpu hotplug implementation of arm platforms are based on the same skeleton. We have 3 main function :

Some code factorization have been added in the next release : the completion has been put in the common arm code. The platform_cpu_kill just need to return 1 unless some specific platform stuff and the platform_cpu_die just need to deal with the powerdown sequence of the core.

Add tracepoints in the cpu hotplug code for profiling: A proposal has been sent to LKML

The latency measurements must be done in both idle and loaded use cases.

The results that are shown below, are base on 220 latency measurements which have been made with different cpu loads. We have used cyclictest for simulating the cpu load and each 20 tests, we have increased the number of running cyclictest processes.

The script is available here: test_cpu_hotplug_latency.sh 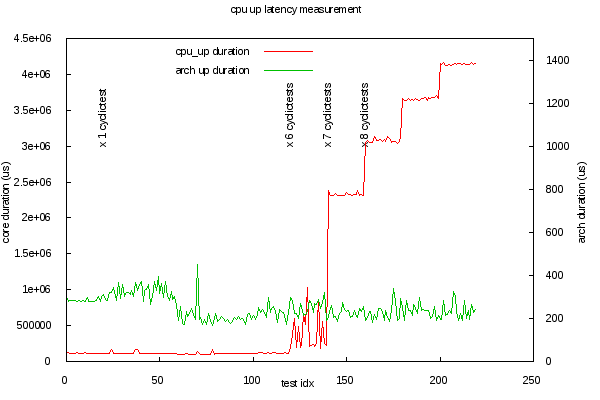 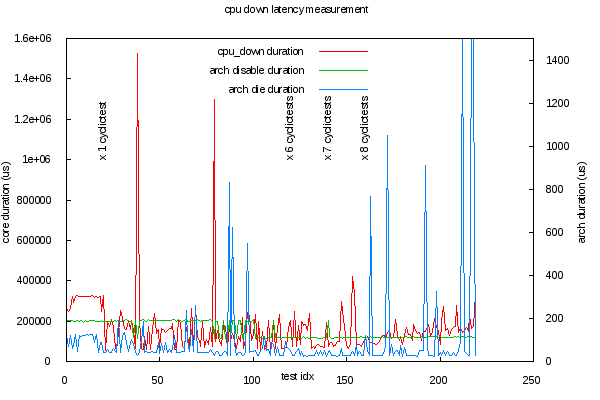 The 1st remark is that we must take care of removing the useless threads like the kconservative workqueue which is not used in our example but which slows down the plug sequence (ondemand governor is used instead).

Then, the only way to improve the cpu plug duration is to ensure that the threads will have enough cpu bandwidth during their creation. The cgroup could be a solution to ensure such bandwidth for the creation of thread. As a proof of concept, we have make a simple test with cgroup and cpu hotplug : we have created a cgroup with lot of cpu bandwidth. This cgroup is empty except for the cpu plug sequence where we add kthreadd to the cgroup. This ensures that the newly created threads will have enough bandwidth. Then, we move all tasks back to the default group at the end of the sequence.

The complete results are available here: to add 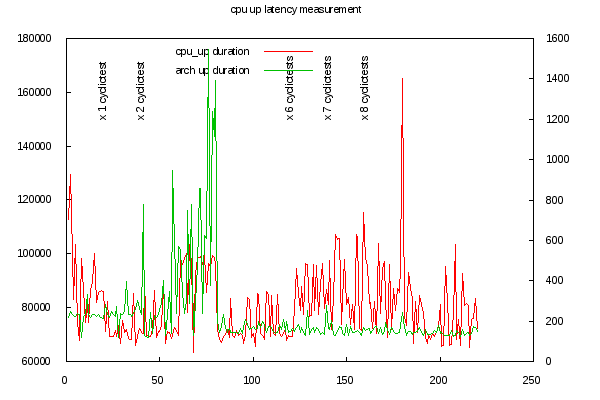 This simple test shows that we can take advantage of the cgroup to minimize cpu plug duration.

The script is available here: to add

Tejun's patches are available in is git tree: git://git.kernel.org/pub/scm/linux/kernel/git/tj/wq.git review-wq-hotplug. We have tested the plug latency on a dual cortex-A9 platform with both the kernel v3.5 and the patches which parks the kthreads instead of destroying them when a CPU is unplugged.

The graph below shows the improvement achieved with the patches. We save the time to create kthreads when a CPU is plugged. 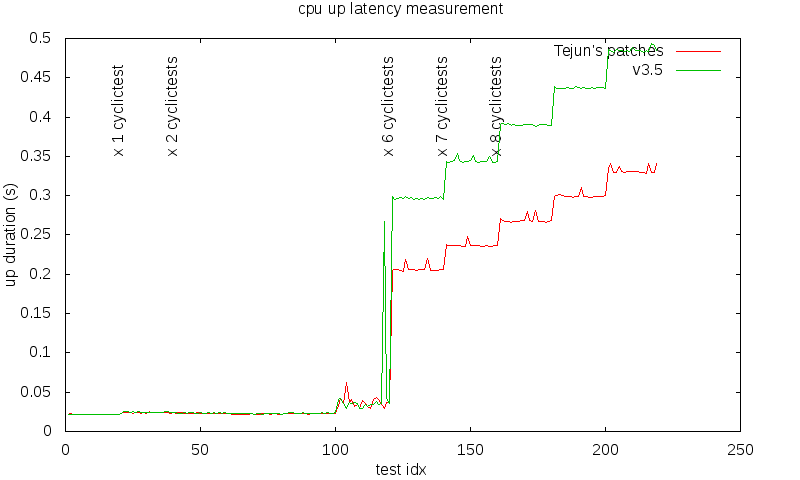