There is a video from the participants summarizing the experience and results: Youtube hangout video.

For three days from Dec 11 to 13 we met at the Linaro offices to discuss how best to develop UEFI on ARM to the point where it can be used in commercial hardware. Specifically we were looking at UEFI through the lens of LEG priorities, but we kept other users in mind too. The goals for this meeting were:

The following was accomplished during the week:

Optional for debugging to connect keyboard and mouse or other peripherals not available on the development boards: it is mainly needed to enable Ethernet on the Arndale or SATA drives on other platforms.

Which SATA and Ethernet dongles?

It may not be worth anyway, as any real ARM server chip will have native Ethernet support without any USB bridge. Possibly a task for the landing teams.

Progress Updates from the sprint

Arndale board is now in the Linaro UEFI tree: http://git.linaro.org/gitweb?p=arm/uefi/uefi-next.git

Arndale is also part of the CI jobs: https://ci.linaro.org/jenkins/job/uefi/

The binaries generated by CI can be found here: http://snapshots.linaro.org/components/kernel/uefi

Arndale is building and booting when built “native”, ie. you can build the Arndale UEFI binary using an Arndale board or another ARM platform.

Tianocore / EDK2 is available as public releases under SVN:

ARM start from a given version, branches out a private ARM UEFI tree adding ARM specific patches and then once it is stable on ARM Olivier tries to push the patches back into the Tianocore project.

Olivier / Ian running the UEFI SCT self Certification Test. There are two versions: public 2.0 and private to UEFI members as 2.3.1.

Linaro is a member, downloaded the code and looked into the license. It does not seem to be any issue with using it or even running SCT binaries inside LAVA. Linaro will review once again internally about the legal terms to publish the results on the Linaro web sites or make the SCT available also to Linaro members.

There is support for UEFI debug via gdb but that is not currently working for ARM, it has not been a priority either so far as in ARM they all use hw debuggers.

OHCI, UHCI, EHCI or xHCI USB support to be added to DXE too for keyboard and mouse at least.

Native hosting is a high priority as well, because currently UEFI does not build natively on ARM and cross-compilation is a must.

BaseTools is a separate project from Tianocore with different synchronisation timing, currently every six months and often breaking. The Tianocore community is already pushing the BaseTools project to release with a more frequent pace.

There are almost individual files for each Cortex-A5, A7, A9 and A15 CPU and all files are almost identical if not for minor changes here and there and some easily identified different sections. It may be wise to evaluate a possible refactoring towards one single common ARMv7 code base and one for ARMv8 and then reduce the individual CPU files as much as possible if not merging them into the same by CPU ID?

Currently the UUID is hard coded in some boards. We need one UUID for the removable devices and then the boot manager (eg GRUB) should have its EFI UUID as a EFI app:

Currently on ARM platforms the uuid of the EFI partition is broken. For example, some Versatile Express boards use the SD card ID as UUID and when moving from a 4GB to a 8GB card the ID or the boot aligning may change and get broken if not rebuilt in the code itself...

On the BeagleBord there is a patch that searches for zImage in the file system. Samsung Origen and Arndale also use this patch.

For future, the Boot Device Selection component should be redesigned to scan all EFI System Partitions on connected storage devices. Attempts should be made to try to share code with the Intel module, potentially breaking it out into a separate top-level component. 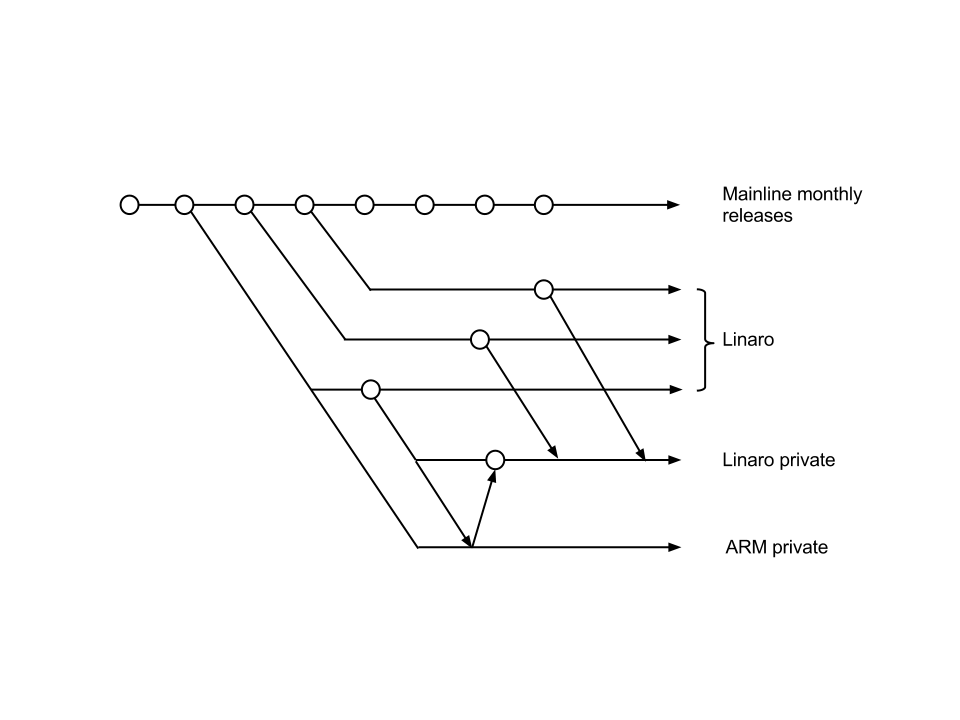 ARM shall send patches against the latest public Linaro UEFI git and send a pull request. Then they can send also the very same patch against an older release, same patch but different commit number.

The private branches are for NDA work, e.g. done by the Landing Teams on platforms that have not been made public yet.

After further discussion we decided that we still need a stable development tree for collecting board support which revises the plan described above. Therefore we will also create a uefi-platforms tree which will track mainline (without rebasing) and serve as a collection point for board support. Any platforms supported by Linaro will target the uefi-platform tree, and will be open to any developers who want to participate.

[We don’t want this to be a Linaro-only thing, or even ARM-only. The intent is to have a common tree for all UEFI platform development since nothing like that exists currently.]

uefi-platforms will serve as a common development tree for any code that we want to maintain over the long term, but cannot be pushed to mainline, such as platform support. Changes committed to this tree will not need to be continually rebased as in the uefi-next tree, and developers will be able to use it for cross-platform cleanups (ie. factoring out common code into a utility library)

The uefi-next [perhaps uefi-platform-next would be better; or uefi-staging] branch will still create a new branch every month to roll up platform support, but instead of having to carry full patch sets of all board support it will be able to use uefi-platforms as a stable base. That way only patches that haven’t yet been accepted into mainline or uefi-platforms need to be carried and rebased.

How does stuff go to mainline?

Any patches that go onto the trees get posted to the relevant email list. Urgent stuff destined for upstream can be cross posted to the Tianocore lists.