All OpenJDK is portable code across architectures. Andrew is modifying three parts: the template interpreter and the two JIT compilers, C1 and C2.

The template interpreter at start up creates a table to associate assembly routines to each byte code, that the parser shall interpretate. Faster then a swtich loop.

C1 is a fairly straightforward macro expander compiler, not difficult to write.

C2 is a much more difficult piece of software.

A full port requires the interpreter and the C1 compiler. C2 may come later.

Elsie, Jeff, tim and Jon ok to publish all on the public wiki. Everybody else agrees.

Jeff: the AArch32 and AArch64 logo's refer to the execution modes on the ARM 64-bit processors, while actually in the roadmap slide we refer to work for the v7 and v8 platforms. The icons may be misleading for people outside the LEG-SC, who may thing that the work is for the v8 platform only and running in either 32 or 64-bit modes.

Update on the assignees 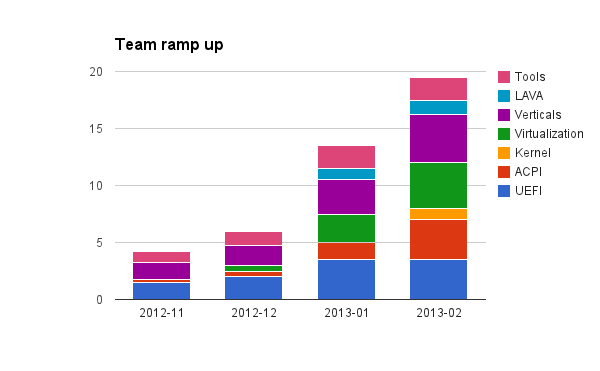 Assembly scan and other optimisations

On 7th February, next LEG-SC call, Deepak Saxena will be the special guest and give an overview of the activities in the core Kernel WG in Linaro.

On 14th February, second next LEG-SC call, Amit Kucheria will be the special guest and give an overview of the activities in the core Power Management WG in Linaro.

Actions from this meeting