Agreed to meet on 15th January, the day before the Open Compute Summit in the Bay area. Facebook kindly volunteered to host the meeting.

Plan to start at 10am and continue till about 6pm then dinner together.

The meeting will take place in building 17, let's meet altogether at the lobby of building 17 itself (not at the main entrance of the campus).

David/George will join for dinner.

David: there is a master schedule available LCA13 - Schedule - Master.pdf and it is recommended that all LEG-SC members participate for the whole week.

The minutes from last meeting are available at:

From this call onward, minutes will be posted in the private wiki and once approved then published in the public wiki.

Reviewed feedback from members who needed more time to answer to the request to approve GRUB2 work under the GPLv3 license and HipHopVM work under the PHP and ZEND licenses.

In favor: AMD, Applied, ARM, Calxeda, Canonical, Cavium, Facebook, RedHat, Samsung, ST. Samsung specifically approves ZEND/PHP, for GPLv3 for Grub2 they are ok with it given that they will not ship it directly in products.

HP most probably OK as long as HP assignees are not involved in GPLv3 code.

Bill from TI commented that it should be OK for TI but the new legal team is not fully up to speed yet and it may take some time more so he suggests in the meanwhile to proceed and request approval to the Linaro TSC.

waiting final approval from the TSC

ACTION: Andrea to send a deadline for the majority vote to the TSC.

Update on the assignees

Calxeda/Rob to share the profiles in the coming days, assignees ready to get on board from 1st February.

Canonical/Kiko is waiting for the final approval for the two profiles, ready to start anytime.

Cavium/Prasun will share one profile in the coming days.

HP/Tim and Paolo may consider a profile for the Distributed Computing application vertical, rather than pure LAVA.

The target numbers in the following table need to be reviewed at the face to face meeting next week. 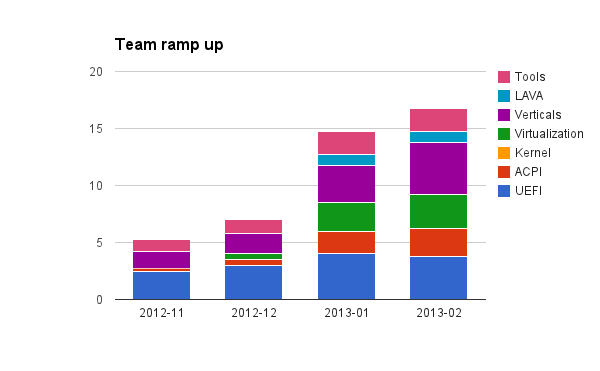 Check out the Engineering report and the https://wiki.linaro.org/LEG/Events/UEFI_summit_201212.

Update on the roadmap and on Verticals

Roadmap published and available from https://wiki.linaro.org/LEG/

The distributed computing vertical still needs to be sketched, Jon and Larry will work on it.

Agreed to continue the work on verticals in separate sub teams, each one made of its sponsors and the assignees. Create wiki pages for each vertical and move all contents from the private draft verticals shared document. LEG-SC sponsors will update all other representatives about their verticals at every LEG-SC call.

All roadmap cards to be reviewed face to face on 15th: http://cards.linaro.org/secure/StructureBoard.jspa?s=105

Machine Check Exception: discuss on 15th with Assaf, Jon and Rob as main ones. The initial draft card is available at: http://cards.linaro.org/browse/CARD-330.

HHVM: the card being updated by Ali and Owen. Dependencies on OE, Fedora, Ubuntu to be cleared asap.

Actions from this meeting