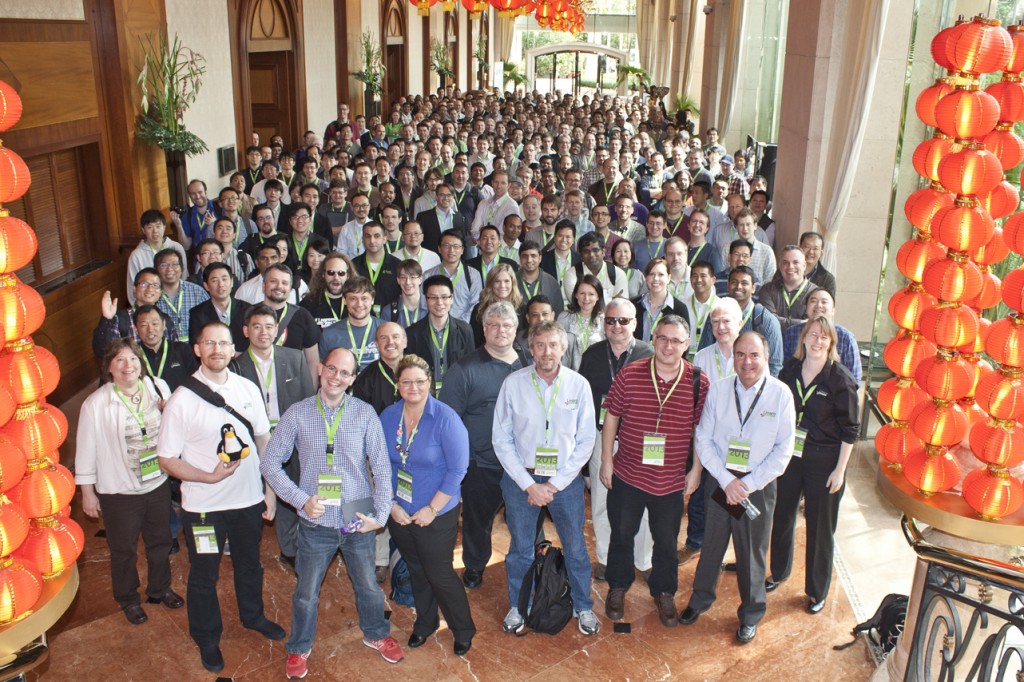 Linaro Connect Asia 2013 (LCA13) took place at the Gold Coast Hotel in Hong Kong on 4 - 8 March. The themes that echoed through all the keynotes, the sessions, and even the hallway tracks were open collaboration and how to be good citizens in the upstream kernel and other member communities.

There were a total of 308 people who attended Linaro Connect Asia 2013 representing 46 companies. Co-located with Linaro Connect Asia 2013 was the Open Compute Project (OCP) Asia Summit which had 40 attendees. There were over 3,100 meals served to attendees and 77 sessions and 126 meetings which were held through out the week. Joe Bates, VP of Member Services for Linaro summed up the awesome busyness of this week in his "Wrap-Up" talk on Friday, 8 March 2013. This was one of the most productive Connect events to date with more moving pieces and parts than ever before.

Engineers returning to their companies after Linaro Connect Asia 2013 should be able to boast about knowledge of the latest software developments around ARM, new ways of optimizing the latest ARM technology and a strong desire to return.

Linaro Connect Asia 2013 was all about engineering. The event sessions as you can see are a mixture of discussion, planning and agreement about how to engineer solutions to the projects being run within Linaro. There were 6 keynotes and the sessions were split into focused kernel, power management, toolchain, graphics and multimedia, platform, validation, and QA tracks with Mini-summits and workshops laced throughout the week to bring focus to cross-team thinking and training in key areas.

There was the opportunity for face to face interaction with leading open source maintainers such as Greg Khoar-Hartman, the upstream stable Linux kernel maintainer and many other engineers which is a key benefit for many attendees.

Remote participation was also available for most sessions via Google Hangouts OnAir, but nothing beats the opportunities for interaction in person. Below are links to the daily schedules, slide decks, etherpad notes, video sessions and interviews from the event.

To join with the team building the future of Linux on ARM, plan on joining us for Linaro Connect Europe 2013 (LCE13) in Dublin from 8 to 12 July.

There were 5 full days of events and sessions

The LAVA Workshop consisted of 4 hours of packed with LAVA information. Attendees needed only their LCA13 registration badge, laptop with prerequisites software pre-installed and the motivation to learn how LAVA administration and test case development works.

The ARM Server Mini Summit consisted of 4 sessions about the following topics:

UEFI: Updates on the maintainership rules, Linaro tree, SCT and test integration in LAVA, collaboration with ARM and the Tianocore community, technical achievements and plans for the next steps, discussion on PXE boot.

ACPI: Updates on ACPICA porting on ARM and initial trials with ACPI tables. Plans for the next steps.

While not a mini-summit it did work out that on Wednesday 6 March there were 3 hours of back to back sessions dedicated to networking on ARM. This group of sessions included:

PREEMPT_RT: PREEMPT_RT is a set of maintained kernel patches supporting realtime operations. Historically, the ARM platform support has ‘bit-rotted’ over time; there being a lack of ongoing testing and maintainance. As well as adding features, we need to bring PREEMPT_RT into a continuous integration loop. Other patchsets of interest to networking include NO_HZ_FULL. There may be some cross over with zero overhead Linux.

Big Endian Challenges in Networking: Much networking software is big endian and, even in the cases where it was written to run either endian, it is rarely fully tested. The approach that LNG is taking is to extend gcc, marking modules and data structures as big endian. Code will be generated that accesses the memory appropriately, swapping bytes as needed (this is known as a bi-endian compiler). Other tools will be considered, for example, extensions to the Linux Kernel sparse checker.

While Android has been created for mobile devices -- phones first and now tablets -- it can, nonetheless, be used as the basis of any touch-screen system, whether it be mobile or not. Essentially, Android is a custom-built embedded Linux distribution with a very elaborate and rich set of user-space abstractions, APIs, services and a virtual machine. This four-part workshop was aimed at embedded developers wanting to build touch-based embedded systems using Android. It covered Android from the ground up, enabling developers to get a firm hold on the components that make up Android and how they need to be adapted to an embedded system.

Specifically, Karim started by introducing Android's overall architecture and then proceed to peel off Android's layers one-by-one. Then he covered the Android Open Source Project (AOSP), the open source project under which Android's source code is released. Following that session Karim dug into the native Android user-space, Android's power tools, and covered how hardware support is implemented in Android. Given that Android is built on top of Linux, Karim also reviewed some embedded Linux tricks and showed how the kernel is modified to support the Android user-space. Additionally, these sessions looked at the System Server, the Android Framework and core Android applications, as well as how to customize them.

There were a total of 108 videos recorded and posted to various YouTube channels from Linaro Hangouts on Air (informal live streaming and recordings of the sessions for remote participation), armdevices.net, and FormsCom. All of the videos have also been downloaded and put on people.linaro.org for those who can not access Youtube.

Nicolas "Charbax" Charbonnier of ARMdevices.net joined Linaro Community Manager, Amber Graner and the FormsCom AV crew to film and interview various people about their roles and take on various aspects of the ARM ecosystem and Linaro. Those interviews include:

Linaro has seen tremendous growth and has made a significant impact on the Linux kernel due to the talented and motivated Linaro engineers and assignees. On Friday, we recognized those whose impact and contributions have been especially noteworthy. Those recognized included:

Most Significant Contribution to the Industry 2012: ARM SoC

Most Significant Contribution to the Industry 2012: UMM

Congratulations to all who received these awards. The video for the Awards session can be seen here. For those who can’t access YouTube the download is available here.

Individuals and organizations who are using Linaro Code and ARM-processor based boards are encourages to show-off their work at Linaro Connect events. (Video and Images from this portion of the event are still in production and will be available over the upcoming weeks.) If you or your organization would like to participate in the upcoming Demo Friday event in Dublin, Ireland please see http://www.linaro.org/connect/demo-friday for more information on to participate in this portion of Linaro Connect.

If you have ever wondered who makes up Linaro, where those people live, how we work and what makes the organization so remarkable, then we strongly encourage you to watch the presentation that Mike Levine, HR Director gave at this event.

Photos from this event

If you or your organization joined us in Hong Kong, thank you! If you are looking through this amazing list of sessions and videos and thinking that you or your organization would benefit from attending a Linaro Connect event and you're kicking yourself because you missed all the energy and excitement that comes from building the future of Linux on ARM; '''then join us in Dublin'''.